Aboriginal elders agree – we need to bring black and white kids to these remote rock art sites – sit them down together in the caves and share with them the knowledge.  This was the discussion around the campfire as Paddy (gently) exclaimed “Look at that !” – and we all turned to see a massive green ball of light trailing an orange flame go screaming across the sky. Waine said he could hear it, we all sat wide eyed at this amazing sight. Most meteorites fade quickly but this one just kept on going – we expected to see it crash, but it disappeared after seemingly ages, behind trees.

This big green light and our dreams that night were clear messages to expand the powerful teachings of connecting with the land, rock art and the wisdom Aboriginal people have to offer. The next night we were singing rainsongs, and two days later on entering the Bungle Bungles sacred landscape, we were greeted by a cleansing storm, a full two months ahead of season – so much rain the Tanami track was closed for a few days.(This adds to the theory that singing in rain works – and we are experiencing drought because we are not singing up the land – as Aboriginal people have done for millennia.)
As we entered the powerful energies of the Cathedral site in the Bungle Bungles, the full moon rose to greet us, and a lone giant Jabiru bird watched our progress. After our group sang some gentle songs together, a giant child’s face appeared in the rock – winking at us – as an affirmation of a job well done of supporting the new creation for future generations.Later after processing film we had taken before entering the Cathedral, further affirmation was provided of our experience and approval by having inadvertently captured a “kiddie wink” from a smaller “winking” bee hive dome (see photo). 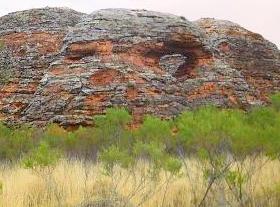 Ask for details at [email protected]

Or Family Tours and Travel

Our trip to the Northern Territories was planned at the last minute and we chose just three travel groups to...
Spirit Safaris – Australian Wilderness & Outback Tours
2014-11-23T21:16:05+11:00
Our trip to the Northern Territories was planned at the last minute and we chose just three travel groups to contact. We intended to fly to Darwin and during the approximately 2 weeks we had until our boat arrived, wanted to see Kakadu, Katherine's Gorge, Alice Springs and Uluru Rock. The other criteria we had was ,at some point, we wanted an Aboriginal guide. Richard of Spirit Safaris was clearly the most responsive and, in short order had a trip planned around the itinerary we had established. But travel is more than sightseeing and each person you meet brings something of themselves to the mix. It is exactly this point that, I felt, made being with Richard and Lynne the right choice. Victor was the perfect balance for an aboriginal guide. Still steeped in his traditions, he was, none the less, open to our curious nature and answered our questions warmly and with insight. His personalized views of his culture, the land and the rock art added to our understanding and appreciation of what we saw. The major attractions for each area are pretty much set, whether you 're on a river or at one of the famous rocks. The information, insights and personalized service distinguished how we experienced each area and was attributable to being with Richard and/or Lynne. Their lunches along the way were a real treat. We had a great time and, despite significant heat, made long hikes, met Victor, our aboriginal guide and accomplished our goal of a total experience. Spirit Safaris is aptly named; it's where Richard and Lynne come from as people. This is the 'secret sauce' they bring to the experience. My wife and I are very experienced travelers. I can't think of better people to have explored the Northern Territories with or...
https://www.spiritsafaris.com/testimonials/murray-janet-rosenthal/

Bernie and I are writing to express our complete satisfaction with our recent tour from Alice Springs. In particular we...

Bernie and I are writing to express our complete satisfaction with our recent tour from Alice Springs. In particular we want to express our appreciation of the job done by Jerry. He was constantly on the alert for our needs and guided us through each day’s activities expertly. He was totally organised and nothing was too much trouble for him despite some very long days.
https://www.spiritsafaris.com/testimonials/jim-and-bernadette-wright/

"Thanks from the bottom of our hearts for the wonderful experience you gave us for our holiday with you.” HELLO!...

My partner and I have done three amazing trips with Richard O'Neill of Spirit Safaris. In 2013 he took 2...
Spirit Safaris – Australian Wilderness & Outback Tours
2017-04-08T10:55:29+10:00
My partner and I have done three amazing trips with Richard O'Neill of Spirit Safaris. In 2013 he took 2 couples Alice Springs to Broome across the Tanami Track, in 2015 he took us from Adelaide to Alice Springs via the APY lands to visit the Aboriginal Art Centres where we bought beautiful paintings. In 2016 Richard took 4 of us from Darwin to Broome through the Kimberly via Gibb River Road with an emphasis on Ancient Aboriginal Rock art hidden in the the stunning country. Our trips were a mix of camping and accommodation, and included flights arranged by Richard over Lake Eyre, the Bungle Bungles, Mitchell Falls and Horizontal Falls. We can't thank Richard enough for putting the "Spirit" into these trips for us. We appreciated his care and interest in each of us, and for sharing his knowledge of Aboriginal Culture, spirituality of both the land and life in general (Ekhart Tolle's CD added to the peace and calm on one long drive - loved it!) All three trips were excellent - good food, good company, lots of local information about places and peoples, a spirit of co-operation and fun helping to set up for meals and campsites, seeing amazing scenery, experiencing the vivid light, the night sky and changing colours of the country, plus the beautiful art at Aboriginal communities and on the ancient rocks. Richard is a very professional guide and such great company, we are working on another trip next year to visit another area of the APY lands (SA/WA/NT borders), this time all accommodated for my comfort!! We can't thank Richard and Spirit Safaris enough for opening our eyes to the beauty, depth of history of Central Australia. We highly recommend his tours for a great small group experience. Margaret A
https://www.spiritsafaris.com/testimonials/three-excellent-outback-trips-spirit-safaris/

Jerry – Hope all is going well for you. Both Lee and I found it difficult to say goodby. You had been such a great guide but not just a guide a friend over the previous days and we did not know what to say. So it is a big thank you for a very special experience.
https://www.spiritsafaris.com/testimonials/steve-lee/

Hello Richard, Here is an image of a bronze sculpture I am exhibiting at a gallery in Melbourne. I thought you might like to see this one … as it was inspired by our wonderful Kimberley trip last year. Wishing you all the best for a busy and productive . Kind regards.
https://www.spiritsafaris.com/testimonials/jenny-loft/

Doug Murphy “How professional you are” 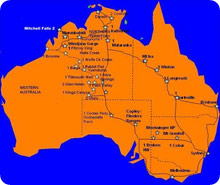