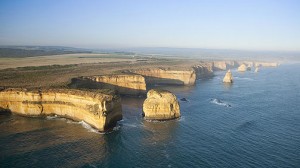 Discover the dramatic rock sculptures of the 12 Apostles, the mystical Bay of Islands and the many viewing points along the Great Ocean Road affording spectacular views of the Southern Ocean. Watch southern right whales from the shoreline at the nursery in Warrnambool & meet the Penguins.

Formed by tonnes of marine life falling to the sea floor, the Limestone Coast is book-ended by rivers. The coast heads south from the Coorong at the Murray River mouth and east to the Glenelg River. It’s a treasure trove of natural wonders.

The Coorong National Park is an incredible spot for four wheel driving (4WD), fishing and boating. Birdwatchers, you’re in for a real treat. More than 80 species live in this series of long, shallow saltwater lagoons. Towering white sand dunes separate the Coorong from the wilds of the Southern Ocean.

Scattered around these dunes are mounds of shells. Called “middens”, they point to the generations of Ngarrindjeri who have lived in this area.

The Limestone Coast’s burgeoning wine industry was founded in 1891. Today, the Coonawarra is the jewel in the region’s wine making crown and is well-regarded as Australia’s top producer of premium red wines. Explore this 12 kilometre strip of precious terra rossa soil, then sample wine from the cellar doors in Wrattonbully, Mount Benson or Padthaway.

Mount Gambier consists of the peaks of 3 extinct volcanos, with the Blue Lake being one of the craters. The Blue Lake is the drinking water for the city and exposes the crystal clear water that has filtered underground through the limestone, passing slowly beneath the city. Each year in November the lake starts its colour change from winter steel blue to brilliant turquoise blue and then in March changes back to steel blue. With average depths of 70 metres, the lake contains 36,000 million litres (ML). It is the source of water to the city 3,500 ML is pumped annually from the lake into holding tanks which gravity feed water to the city and surrounds. The Blue Lake and the Crater Lakes area is a significant site within the Kanawinka Geopark and is a State Heritage Area. 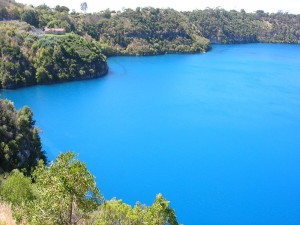