The Laura Festival is the biggest indigenous dance event in Australia. Join Spirit Safaris to combine visits to Undara Lava Tubes and the Dinosaur Trail of Hughenden and  Richmond as we travel the East Coast of Australia from Sydney via Byron Bay, Brisbane,  Rockhampton, Undara lava tubes, Townsville, Cairns, Port Douglas, Daintree Rainforests, Cape Tribulation, Cooktown, Jowalbinna for Quinkan rock art (2 nights) to the Laura Festival (3 nights). Explore the Dinosaur Trail as we travel on to Cloncurry (Qantas  birthplace) Mt Isa, Camooweal, Barkly Tablelands,  3 Ways, Mataranka Hot Springs ( and “We of the Never Never” homestead). Into Kakadu via Katherine, Cooinda (with Yellow Waters Cruise) to Darwin.

2015 – Laura Festival dates  June 19-21 – Laura Festival occurs every 2 years and is a celebration in Northern Queensland of Aboriginal dance from around the country. Join us on this rare opportunity to experience this special event, with 3 nights camping at the venue, after exploring the Daintree rainforests and the lava Tubes

Join us to travel by luxury 4WD to the northern most tip of Australia at Cape York & Thursday Island, exploring Jowalbinna for Quinkan Rock Art , then Cooktown, Weipa, Lakefield National Park & the Daintree Rainforests.

Day 1 – Sunday – Cape York Thursday Island Tours – Depart Cairns 730 am and travel through the rainforests and the Atherton Tablelands via picturesque Kuranda and Mareeba via the Palmer River area famous in the gold rush days, to the Laura Dance Festival site (time at festival available if dates match – biannual event). You can choose to spend the day here, or travel the short distance to the Quinkan Rock Art Reserve, and an afternoon tour of this amazing rock art site. Overnight Lotus Bird Lodge, Lakefield National park BLD

Day 2 – Depart up the Peninsular Development Road for the Old Telegraph Track (OTT) heading for Cape York. We travel via the Hann River Roadhouse, and check out the Musgrave Telegraph Station. Musgrave was first built as an overland telegraph station in 1887, along with Palmerville, Fairview, Coen, Mein, Moreton, McDonnell and Paterson. It was named after Sir Anthony Musgrave (1828 – 1888) who was Governor of Queensland from 1883 to 1888. These stations were  repeater stations, with great banks of batteries and a generator to boost the power in the telegraph line. We stop at the Lotus Lodge for morning tea. Beyond the township of Coen we pass the old Quarantine Station, and begin to pass a number of exciting creek crossings. We pass through the Mungkan Kandju National Park, a large wilderness park that stretches from the McIlwraith Range foothills, between the Archer and Coen rivers, and consists of open eucalypt woodlands, melaleuca swamps and various rainforest types. The Wik Mungkan, Kaanju and Ayapathu Aboriginal peoples, the Traditional Owners of the park, welcome you to their land and ask that you respect their culture and country during your visit. We take a break at the Archer River Roadhouse, and cross the Piccaninny Plains and Savannah country to arrive in Weipa for a tour of the massive bauxite mine operated by Rio Tinto. Weipa is the largest town on Cape York Peninsula, and has approx 3000 people supporting the mining and export of bauxite and cattle. Nearby is Duyfken Point, where Dutch explorer Willem Janszoon recorded the Australian coast in 1606, 164 years prior to James Cook. BLD Overnight Weipa 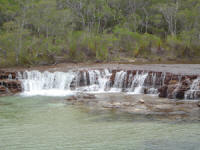 Day 3 – Depart Weipa to the OTT, crossing the Wenlock River.  After a stop at the Moreton Telegraph Station, we turn off the OTT to the Bamaga Rd and enter the Jardine National Park and the Heathlands. Be entranced by the unusual change
in the landscape. The Heathlands is a vast area of 2 metre high wet and dry heath vegetation which live side by side and is home to an abundance of wildlife. Enjoy a break at Eliot Falls before we cross the notorious Jardine River. We pass through the administrative centre for the region, Bamaga to Siesia, the “Gateway to the Torres Strait”. Today we also travel on to the farthest northern point of Australia to stand on Australia’s northern most tip, view the numerous islands of the Torres Strait, and the meeting place of the Arafura and Coral Seas. Overnight Punsand Bay Resort, Barmaga, Cape York BLD

Day 4 – At 8 am depart by fast cat ferry for the 1 hour 10 min ride to Thursday Island, passing Friday and seeing Wednesday Islands enroute. Thursday Island is known as Waiben, meaning ‘no water or place of no water’. In 1877, TI  was an administrative centre for the Torres Strait Islands established by the Queensland Government. In the early days over 1000 Japanese pearl divers were operating here. In 1880, Thursday Island acted as the defence centre for Australia and old canons remain on the Island. On TI, a 1 hour island tour is included, highlighting local history and landmarks, then free time to enjoy the Torres Strait Islander cultural centre, and pearl, souvenir or window shopping. After lunch, (own cost) the return ferry departs at 2:30 from Engineers Wharf, arriving approximately 3:40. Enjoy free time this afternoon till dinner. Optionally, from Thursday Island your can join the Horn Island tour which visits WWII sites including a WWII museum. This tour also meets the last & only return ferry, and does not give time to look around Thursday Island. If you choose, you can overnight here and join us early next morning (additional cost) BD Overnight Punsand Bay Resort, Barmaga, Cape York

Day 5 – Heading south we visit the WWII aircraft wrecks of Bamaga, and skirt the Jardine River National Park, take the Jardine River crossing then a rest stop at Fruit Bat Falls.  We visit the beach at Captain Billy’s Landing located on the east coast, and arrive Moreton Telegraph Station for a few yarns, a great meal and overnight. BLD

Day 6 – Today we explore Lakefield National Park. The park is home to threatened species including the red goshawk, Lakeland Downs mouse and spectacled hare-wallaby. Hann and Kalpowar crossings are two of the many significant Aboriginal cultural sites found in the area. Barramundi abound here if you are feeling adventurous, and many waterbirds inhabit Low Lake. Enjoy this rich nature and great waterholes for swimming. Arrive Cooktown late afternoon for overnight. BLD

Day 7 – Cooktown to Cairns via the Bloomfield track & Daintree Rainforests. The Daintree Rainforest encompasses an area of approximately 1,200 square kilometres, from the Daintree River north to Cooktown and west to the Great Divide, representing the single largest block of tropical rainforest in Australia. The area protected under World Heritage listing covers an area of approximately 12,000 square kilometres, stretching from Townsville to Cooktown 75 per cent of which is tropical rainforest, an area equivalent to about the size of Sydney. We explore and discover the magic of rainforests on our Daintree Rainforest Discovery centre walk.

Cooktown was first established for the goldfields on the Palmer River in 1872, although its also famous for when Captain Cook repaired his ship, The Endeavour, after hitting coral on the Great Barrier Reef. We check out some key local landmarks, including the Vera Scarth-Johnson Gallery, whose artwork consists of illustrations of the flowering plants from the region, the Grassy Hill Lighthouse which is home to the Cooktown lighthouse, built in England and shipped to Cooktown in 1885, the sun dial which is actually a ‘Global Positioning Monument’ and Captain Cook’s Grassy Hill Monument. Also, the James Cook Museum, including canon and the anchor from from Cooks ship, the HMS Bark Endeavour and Chinese, Pastoral, Mining, and Indigenous artefacts.

We depart Cooktown via the coastal road (4WD only) and witness Black Mountain National Park, home to mysterious Aboriginal legends. We visit the heritage-listed Lions Den Hotel built in 1875, then spectacular Bloomfield Falls at the Bloomfield River crossing.  This track was the site of many protests and the Daintree Blockade in 1983. The Bloomfield track takes us to Cape Tribulation and on to the ferry to cross the Daintree River. Time permitting, we travel through Mossman and visit Mossman Gorge, and a side trip via Port Douglas. Overnight Cairns. BLD

Day 8 – Tour ends in Cairns after breakfast for flights home or join us to travel from Cairns to Darwin via the Lost City, Undara Lava Tubes and Savannah Way Tour